"I could not be more excited for this once-in-a-generation opportunity to truly reform our tax system.

Since 1986, the American people have not seen a meaningful update in federal tax policy. They have been asking for it for decades, and today, we've taken a huge step forward in delivering that promise.

More than anything else, the most common complaint I hear about the existing tax system is it's complexity. With this in mind, we aim to make it possible to file your taxes on a postcard. This simpler, quicker and easier system will give working and middle class Kansans the same access to the tax code as someone who has hired teams of accountants and lawyers to seek out every loophole.

These aren't just abstract changes for those who don't need it. Ideas like repealing the death tax, and allowing the first $12,000 of income for individuals and $24,000 for couples to be tax-free, and married couples to keep the first $24,000, are tangible ways that this reform will allow more money to stay in your pocket.

This fairer, simpler system will be a huge relief for the working and middle class. Gone are the days of a 75,000-page tax code full of favors and loopholes for the most powerful, wealthy and well-connected. This reform is overdue, and why many of my colleagues and I came to this body - to bring real-world, commonsense reform for our generation, for our kids, and for our grandkids. 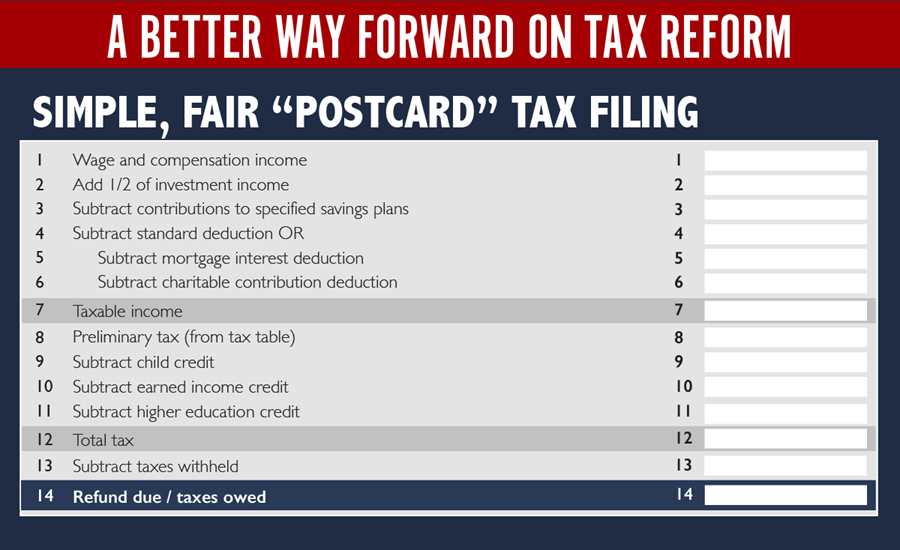 Weigh in on the plan HERE.